Having written a brief piece about Mrs Catchpole’s grandfather’s service at sea prompted me to look through my late father’s papers regarding his Uncle Ernest.  Father always had a soft spot for him and the painting he did of the ‘SS Kaikoura rounding Cape Horn’.  As a child he used to stay with him and the painting had always fascinated him.  When their old cottage in Tangley was being sold father was given the painting plus a collection of his merchant navy papers.  I thought these might be of interest to others as like Mrs Catchpole’s grandfather, Uncle Ernest was there at the transition from sail to steam plus they are a snapshot of a hard way of life long gone.

First a look at a photograph of Ernest in later life with his wife Pheobe.  The photograph is courtesy of his great, great grand daughter, Caroline Hampton.  Ernest Arnold Ashby was born in 1870 and died in 1946.  Before he went to sea he was a Horsekeeper. 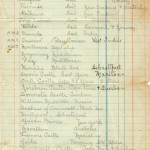 This is the list of ships he sailed on in his own handwriting….

Not in chronological order it would seem when compared with the discharge certificates. 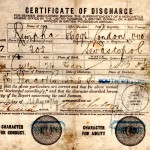 Voyage on the ‘Rimpha’ to Sevastopol.

Closer examination reveals he is known as Thomas Cullen and gives his birth date as 1872.  The name Cullen was his mother’s maiden name.  But why he chose to be known as that and stated his age as younger I have no idea.  Surely it was usual when lying about one’s age to say one was older? 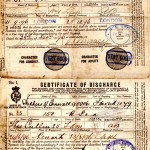 Voyage on the ‘Duchess of Cornwall’ to the Black Sea and on the ‘Lismore Castle’ to Cape Town.  Returning on Christmas day 1896 and discharged in London. 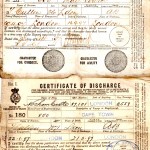 Voyage on the ‘Norham Castle’ to Cape Town and on the ‘Kaikoura’ to an unspecified destination.  This voyage is described as Mail Service.

At this point Ernest’s turn around times have been very short, perhaps a sign of our reliance on shipping to service the United Kingdom and Empire.

The documentation trail goes cold until June 1912 when the Board of trade introduced a booklet titled ‘Continuous Certificate of Discharge’. 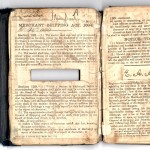 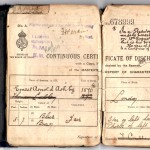 Notice the sworn declaration changing his name and birth date.

The reference to a tatoo of ‘Pheobe’ refers to his wife whom he married in 1898 in Tangley, Hampshire.  He resided there until his death in 1946. 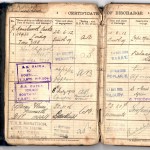 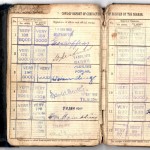 Entry number 5 is the ‘African Prince’ and now he is sailing during wartime.

The ‘African Prince’ was torpedoed off Ireland in July 1917 and sunk.

How lucky was Ernest? 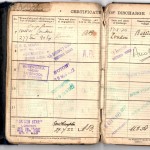 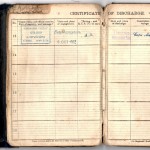 In the 1920’s Ernest served on the prestigious ‘RMS Berengaria‘ operated by Cunard.  The ship was originally the German ‘Imperator’ but was taken as reparations.

Ernest retired from the sea on the 28th May 1922 with an unblemished record. 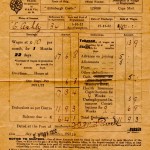 His last voyage was on the ‘Edinburgh Castle‘ to South Africa on the Cape Mail run.  He was at sea for 52 days.

His last voyage earned him £6 4/- 1d after deductions probably in those days a better wage than a lot of people.

To finish, some personal notes from a sailor in a far away land to his loved ones at home 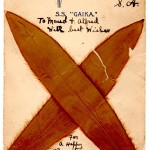 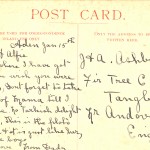 And below an envelope addressed to him on the ‘SS Gaika‘ from those loved ones at home to say he was not forgotten. 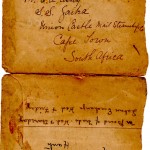 Envelope addressed to the SS Gaika