Not all work that I am asked to undertake requires a complete rebuild. From time to time I get asked to simply tweak a model in order to get it running again. This job was one of these situations.

The builder of this 3½” gauge model of an LBSC designed ‘Britannia’ had reached a maturity of years where the thought of working on a heavy model in a cold workshop was now a case of ‘The spirit is willing, but the flesh is lacking’. However, Peter did want to see her in steam once again and so he contacted me and asked if I could give her a look over and ‘do the necessary’ to return her to a safe, steamable condition. 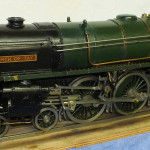 The model as received

A very presentable model which was a creditable first attempt stood before me.
On 40 psi of air she ticked over quite nicely which showed the basic mechanics were okay.
The problem seemed to be getting and keeping water into the boiler as air could be heard hissing out of the various clacks etc.
As the budget Peter had was restricted it was agreed that I would do the bare minimum, so no repaint or full strip down. I set to and investigated the problem. 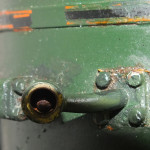 It soon became evident that the years of not steaming, but running on air had not been kind to the balls in the non-return valves. These had either corroded (not rustless) or become gunged up.
Cleaning out the seatings and replacing with Nitrile balls soon had them steam tight. Various glands around steam valves and the water pumps needed replacing as they had dried out and were no longer steam tight.

It was now time to hydraulic the boiler and see how it fared. 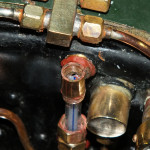 Filling the boiler with water the first strange happening to observe was the gauge glass was reluctant to fill. Out with the water and take the top nut off the gauge with the intention of running a pipe cleaner through the glass.
However, the cause became immediately obvious. The gauge glass had been trimmed too long and was obstructing the top water passage.
Removing the gauge frame and glass proved difficult with all the red hematite gasket filler, but eventually it was off, the gauge glass replaced with one of the correct length, all the threads cleaned up and this time instant silicone gasket material was sparingly used on reassembly. 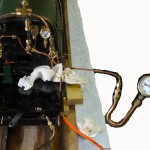 The boiler under hydraulic test 115 psi

Refill the boiler and this time success, a reliable water level. As Peter was not going to run the engine on a public track it was decided to lower the working pressure to 50 psi which would be perfectly adequate and safer for his own short length of track.
The boiler was pumped up to 110 psi and held the pressure with no leaks.
We could now move on to the steam test and setting of the safety valves.

Using a Propane torch in the firebox instead of lighting a coal fire gave me more control over steam production. Should there be an unexpected failure of a joint somewhere and I needed to dump the fire then I could do instantly with a gas torch.

Carefully applying heat to gently bring pressure up we reached 30 psi and I gingerly opened the regulator. ‘Firth of Tay’ gave a wheeze and with a lot of coughing spat out the condensate from the cylinders. The wheels went round beautifully; she was back in the land of the living! Moving the reverser into reverse she responded well. The beats were all nice and even. Applying a little more heat pressure rose steadily to 50 psi and the safety valves could be set. 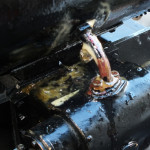 Running for fully ten minutes she was just beginning to warm through nicely when the sound of escaping steam became audible. A quick look round revealed it was coming from behind the right hand smoke deflector. Removing this revealed the cause, the gasket between the cylinder and the main steam pipe flange had given up the ghost. Proving that oil was getting through as the mess was dreadful, the fire was dropped and that was it until it could be repaired.
I won’t bore you with the details of the repair of the gasket; suffice it to say that it wasn’t straight forward.

The next test was with the builder and his wife present and ‘Firth of Tay’ was on her best behaviour. She performed faultlessly and everyone was delighted.

All that remained was to refit the cab, give her a final clean and polish and return her safely to her home shed.

Postscript:
I did take the model up to our club track with the intention of giving her a run. Unfortunately due to the tight radius of the curves on our track ‘Firth of Tay’ had the front bogie foul the cylinders. Plus Peter had made a slight error with the gauge when he pressed the tender wheels onto their axles, they were ⅛” too wide. 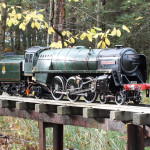