Lateral thinking by a client for whom I had produced several wooden display stands for his galleon models led him to a commission the production of two slate stands for medium sized Ammonites. 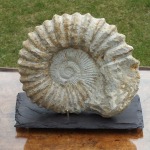 Ammonite sitting on its stand

Slate is not a material that I have used previously as I thought it would be difficult to source and work.  However, a conversation with our local slater came up with the idea of recycling Welsh roof slates and he provided me with two neatly trimmed specimens.  The idea appealed; the aged concept complimented the ancient Ammonites and welsh slate has a lovely purple tinge to it when cleaned and oiled which set off nicely the natural colours of the fossils. 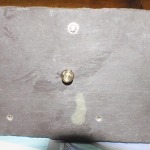 The stands were given five turned brass feet ½” diameter by ½” tall.  The Ammonites weighed up to 5kg each, the fifth foot being placed in the middle of the slate to prevent the possibility of bowing and snapping under the weight. 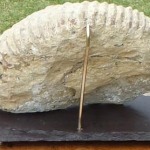 To support the Ammonites at an angle of 60° a brass column was inserted at the rear of the slate and curved at the top to fit into one of the fossils grooves. 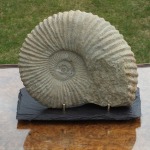 To prevent them from slipping off discrete, short brass pegs were inserted in the front of the slate.

A further commission for another client, this time for a 40kg Ammonite meant upsizing the stand to 37cm by 43 cm by 7 mm thick.  This was the largest roofing slate my supplier had!  The rear support was beefed up to take the weight, but otherwise the construction was the same. 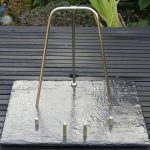 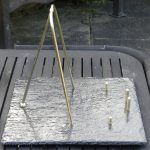 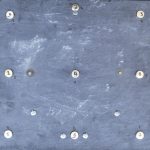 Last word to the client:

‘Many thanks for this, it is very stable and the support keeps it very sturdy in position. 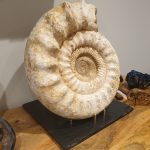 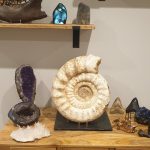 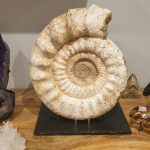 Not strictly model stands, but the concept can be used for small to medium models which would be different to the norm.