July 2011 was where I left of the restoration saga after the production of the first roof in brass.  Although the basic shape was good I wasn’t happy with the ‘dimpling’ as a result of the shaping process.  This was going to take too much time to cover up in order to obtain a smooth finish for painting.

The answer was to use copper and to roll the shape out rather than beating it.  Originally I had dismissed copper as being to malleable and likely to bend easily, but as was pointed out to me the shape of the roof will give rigidity and copper can be hardened.  Thank you Alex for the advice. 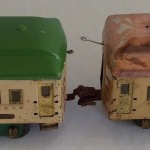 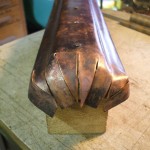 Forming the roof end by overlapping

The hardest part was to sort out the elliptical ends, which was achieved by carefully cutting slots to allow the copper to bend to the shape. This inevitably gave  overlapping.  So by cutting off the overlaps it then produced the shape. 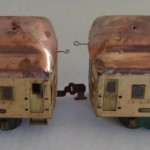 Ready for stripping and painting

The joins were then brazed and cleaned up.  Simple!

The results were more than satisfactory. 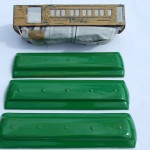 What a difference a decent coat of paint makes! 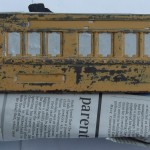 There was no original colour to match to so a green was chosen that best matched photo’s of similar sets on the internet.  Not the most reliable way!

The state of the car bodies can be seen leaving little option but to repaint too. 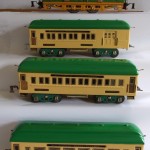 To my mind the original paint job was poor.  It seems that the original finish was just one layer thick straight onto the metal.  Where this had not been cleaned properly the paint had fallen off many years ago leading to corrosion.

As the original colour remained, albeit very faded and scratched, I matched as best I could selecting a Dulux gloss mixed at B&Q.  This was hand painted and when dry has given a very acceptable finish. 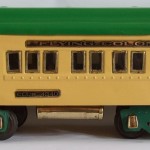 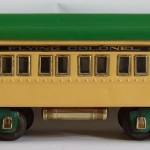 The internal metal work was originally nickel plated and had flaked off due to corrosion.  So I decided to paint and chose a Dulux colour.

The brass work is lacquered to slow tarnishing. 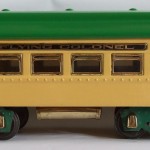 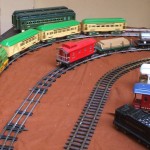 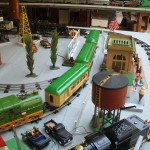 So there we have it, three passenger cars returned from the scrapyard, 75% original 1930’s American Flyer.  The set is only missing the Veranda end car.  Does anyone have one?  Scrap condition of course!