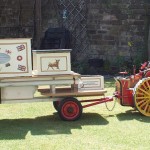 After twenty years of use the paintwork was beginning to look a little tired. A specific area that had suffered was the paintwork on the cladding which had peeled badly in one or two places.  The opportunity was taken to tidy the old lady up and put a spring back in her step before the rally season started. 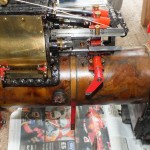 As the cladding was going to have to be removed for painting I asked the boiler inspector to check over the boiler barrel at the same time.

His inspection passed it A1, which made it good for the next twenty years.

The cladding was primed with Phoenix Precision Paints PQ1 single pack self etch primer. This was allowed to dry for a week before undercoating with ICI All Purpose Primer. A very light rub down to remove any blemishes and then two coats of undercoat suitable for ICI ‘Red Stallion 2’. Another light rub down to give a smooth surface and then two coats of ICI ‘Red Stallion 2’ gloss.  Leave to thoroughly harden for two weeks before refitting the cladding.

The boiler shell was first lagged using ‘Kaowool’ ceramic fibre lagging (available from Blackgates Engineering) which was then covered with a layer of ⅟₁₆” birch plywood before the painted brass lagging was added. This should reduce heat transfer to the brass which in turn preserves the paint finish longer. 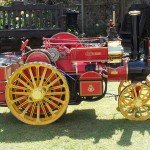 Broadside, gleaming in the sunshine. 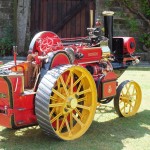 Lining is applied using ‘TrimLine’ gold, black and red tapes. I find it best to unroll the tape and lay it flat on a table for about a week so that the ‘stretch’ put into the tape when it is rolled up is relieved. This way I find that the tape does not shrink slightly once applied which if it does leaves an annoying gap. 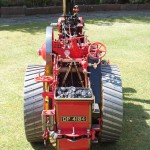 From the man stand end. 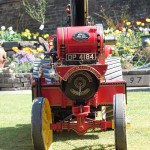 The plate on the dynamo is copied off a full size version!

Other blemishes to the paintwork and lining were touched up.

The results are seen here basking in the sunshine.

Quite the pretty picture!