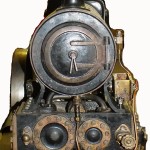 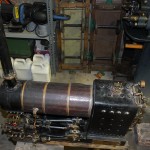 Feeling sorry for itself 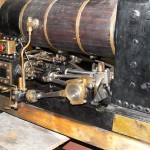 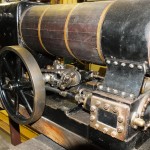 Sadly, due to teenage inexpert hands in the early 2000’s the model had fallen on hard times. 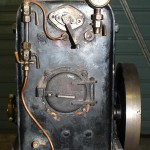 An attempt to remove the regulator had resulted in the steel studs shearing and the abandonment of the model to an outhouse. Further examination of the model revealed a missing lubricator lid, a missing plug out of the lower part of the gauge glass frame and a badly scored regulator flange. 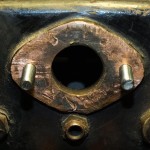 This latter damage resulting from their attempts to split the regulator from the boiler using a screwdriver.

Mechanically the model was in first class condition, turning over by hand quite freely.

Over the course of five weekends and with the assistance of young Kieran we set to on the road to her recovery. 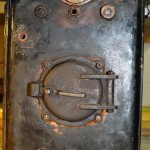 The first job was to replace the sheared studs in the regulator flange and to then hydraulically test the boiler for integrity. The studs were drilled out and the holes re-tapped M5. New studs were manufactured from Stainless steel to prevent corrosion in the future.

The opportunity was taken to replace the original asbestos gasket between the flange joint with an ‘O’ ring surrounded by a brass ring as this would relieve the stress on the packing and prevent a possible blow out.

Internally the boiler was in excellent condition, there being no evidence of any scale build up or deposits of ‘gunge’ in the firebox water space.
Next the boiler was prepared for its hydraulic test by producing blanking plugs for all the backhead fittings.

After 30 minutes the only sign of water were minute tear drops by each of the nutted stays. These would take up under heat and steam pressure and so the boiler was passed. 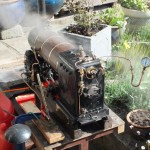 All that remained to do was to reassemble the model and to steam test it. The opportunity was taken to tidy her up a bit. So the wooden lagging was rubbed down and re-varnished, the smokebox and cast base were painted matt black using stove paint and the base under the valve gear etc was painted in red Hammerite. Brass work was given a good polish and the steel work burnished. 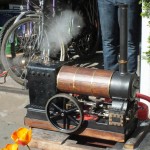 Once again she looked cared for. Although not as glamorously finished as some seen advertised on websites, nonetheless she looked smart and business like which I am sure is how Harold Burningham intended her to be.

On the day of the steam test the sun shone brightly and the old girl purred away without a knock or a clonk anywhere.

I would like to think that old Harold would be delighted to see his creation steaming and gleaming in the spring sunshine once again. Certainly the old girl gave the impression she was happy to be hot and loved once more!

When Kieran took her away that evening his beaming smile said it all. 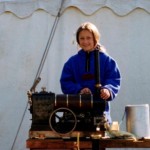 A young engineer polishes the model 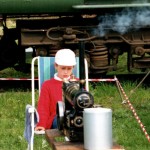 Keeping a beady eye on the fire and water level

Two pictures from my archives showing our elder daughter in charge of the model at the Errol Station Model Engineering display in 1997.

She would keep it in steam the whole day without once losing pressure or water.