A rather tired & forlorn ‘Juliet’ was delivered to the Restoration Workshop recently.  The story behind the model was that it was built by the present owners grandfather in the 1940’s.  For many years it had been put to one side until now when it had been passed on and the owner had decided to get it cosmetically restored as a tribute to his grandfather.

This is the story of the restoration……… 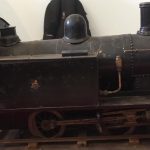 The model as received…… 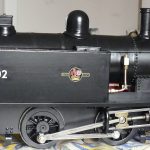 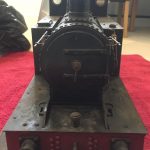 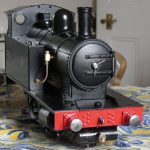 Smokebox door hinges did not line up with the brackets on the smokebox ring.  This meant that the door would not shut if a correct diameter pin was used.  To resolve this a dummy pin has been inserted between the two door brackets & a dummy pin top has been inserted in the top bracket.  This improved the look of the model.

A correct second locking door handle has been made & fitted to replace the nut use previously.  This gives the door a prototypical look.

The lubricator fill plug has been lowered to make it more discrete in the front footplate. 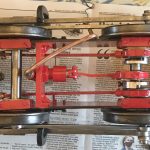 Between the frames have been painted red as have the eccentric straps.  Two pins were replaced as they were too long & fouled the front edge of the left & right hornblocks. 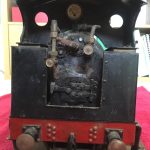 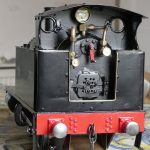 A general tidy up of the boiler backhead, fittings polished & varnished. 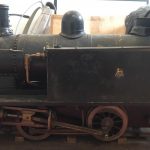 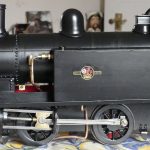 The running number 30102 was chosen as being the last of the B4 class of locomotives.  The British Railways emblem is the later variety which the locomotive carried in its last years of service. 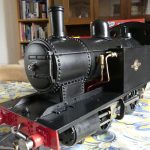 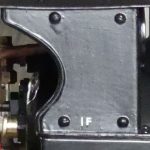 As dock shunters the locomotives had a very low power classification under the British Railways system.

The power classification was placed on the upper cabside on both sides.

“My family and I are delighted with the restoration work done by JSB Model Restorations. Seeing the before and after pictures made us realise what a worthwhile investment it was, and that we should have done it sooner.”

The steel platework has been primed with Craftmaster Paints Anti Corrosive Primer.  This was followed with an undercoat & then two coats of Johnstone Paints Satin Black.

The brass cladding & other nor ferrous fittings has been primed with Phoenix Paints Etch Primer followed by two coats of Johnstone’s Paint Satin Black.

The red on the bufferbeams & between the frames is Dulux Gloss Red Stallion 2, a mixed colour.