These three model galleons had great sentimental value to their owner having been in his possession since he was a boy. 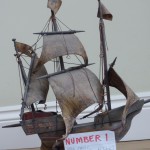 Galleon one as received 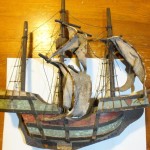 Time had taken its toll, the rigging had rotted to such a state that just handling it reduced it to dust.  Galleon two’s sails had reached a similar state. David’s brief was to restore them to a good state, preserving as much of the original fabric as possible, but not to repaint them as new. 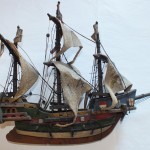 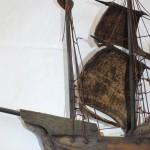 The original builders had nailed the ships together, crimping the rigging firmly to the hull under the heads of the steel pins. Steel wire had been used to reinforce the edges of the sails. Unfortunately the problem with this is that storage in an attic or similarly unheated rooms leads to corrosion of the steel when the ambient temperature changes. Condensation inevitably forms on the cold metal. Over the years this rusting causes the metal to expand which in turn splits the wood and fixes the nails making extraction to replace the rigging tricky. 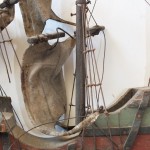 Yard arms broken and sails damaged by use of steel wire

The sails fare little better as the rust (iron oxide) discolours the sails and the acidic nature of the oxide rots the cloth. In the case of galleon two the damp had further exacerbated problems for the sails as over the years it had softened the original ‘glue’ or paint which helped to stiffen the material. This had then assumed a completely different shape as the rigging and spars collapsed.

To conserve the sails and return them to a more realistic shape the following procedure was followed:
1. Repair the broken spars by drilling a 1.55mm hole down the centre of each half. Insert a 1.55mm piece of brass wire so that the two halves could be pushed together. Glue this with ‘Superglue’ and leave to set. If necessary for extra strength the join can be wrapped in thin card and glued or you could fill gaps using epoxy wood filler. Paint to match the colour of the yards.
2. By carefully replacing the thread lacing the sail to the yards it was possible to straighten out the top of the sails.
3. Mix some PVA glue with water and a DROP of detergent. Using a basting brush, carefully paint this solution on both sides of the sails. This should soften the material back and allow you to reshape the sails. Once reshaped I placed over a hot radiator so that it hardened quickly. You will need to keep an eye on them to make sure they don’t wilt during drying, because if they dry misshapen now, you won’t alter them again in a hurry.
4. Once dry remove from the heater and place somewhere warm for 24 hours to thoroughly harden through.
They will have a slight gloss sheen to them, but this will flatten with age. 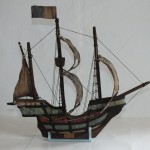 Re-rigging followed standard procedure using Billings or Mantua rigging cord. All the steel pins where replaced with brass pins to prevent corrosion in the future. To facilitate ease of re-rigging in the future I did not crimp the cord behind the pin head instead I left the head slightly proud and knotted the cord. 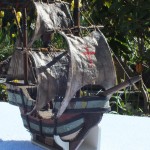 The ‘Blue Peter’ resplendent in the sunshine 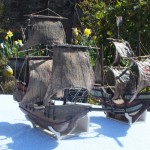 Basking in the sunshine