Only minimal restoration was required on the rolling stock of the set due mainly to the lack of playing as a result of the open circuited controller. 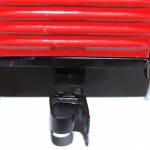 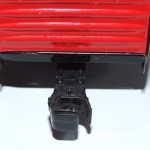 A broken knuckle coupler on the PRR Box Car was carefully repaired by making an aluminium knuckle and attaching it to the remaining stub of the plastic coupler arm by a brass strip and 2 x 12ba bolts. 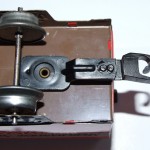 I decided this method would be the least destructive to the car as it did not require the body to be removed to gain access to remove and then replace the pop rivet holding the knuckle arm to the body. It would be almost impossible to do this without damaging the mint paintwork.

The repair is quite discrete, I think you will agree. 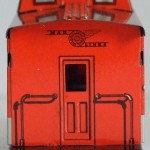 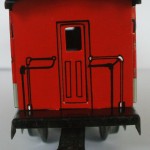 A missing inboard end to the Southern Pacific Lines caboose has been replaced by a carefully made brass 0 .015” close replica, painted to match in reasonably with the original colour.  This replacement can be easily changed if an original end is found.

How the end came to be missing I don’t know, but the tabs to hold the body to the underframe show signs of being released several times.  As a reult they are in a delicate state.

The caboose roof has suffered some minor scuffing of the paint due, I think, to the incorrect packing of the 90⁰ crossover which then fouled the roof.