It is always a pleasure to hear from people for whom I have undertaken commissions.  Just before Christmas this came into my inbox and a most beautiful job Ray has made of the stand, hull and superstructure:

Work during the summer had ceased due to other commitments, but come the dark nights and I decided to have the model finished for Christmas. 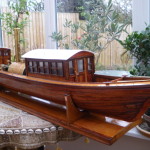 Before I seated the steam plant I did a test in the bath to find out how much ballast would be required.  It became apparent that with a full boiler the boat would have to be ballasted so low in the water that it would be in danger of being swamped. The freeboard was about two inches and the main part of the hull is open decked.  I was not too disappointed with this result.

Incidentally I took my as then unfinished model along to the Anglia Marine Model Boat Club when I joined about six months ago and they were very complimentary about the work you had done on the steam plant. 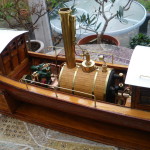 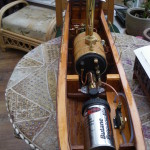 I was turning over ideas in my head of how to link the fly wheel to the propeller shaft, when one day while looking for something else rummaging in one the boxes of odds and ends that I have, I found an old brass flanged Meccano wheel.  The flange fits snugly inside the rim of the flywheel and the brass wheel fits exactly onto the prop shaft, I added two nuts and bolts to the face of the flanged wheel which engage with the two studs in the flywheel and it all connects perfectly.  It can be disconnected just by undoing the grub screw of the flanged wheel and sliding it back.

Incidentally, in November I visited the Warwick National Model Boat Show.  There were about 20 to 30 steam boats on show, and my wife I and both agreed that none of the steam plants were as neat or efficient looking as the one that you restored for me, I am very proud of it.

Jeremy, thank you once again for the work that you so expertly did for me.

A Happy Christmas and a Prosperous New Year to you and yours.