Recently I was given this 1130 train set which was missing all the boxes, consequently covered in dust, but otherwise in good condition.  Once it was cleaned up I found that unusually it was absolutely mint, hardly been run. 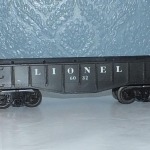 After oiling up I set it up on a short piece of track to give it a run.  Applying power, it blew the circuit breaker, not a good sign!   Taking the locomotive apart again I discovered that by taking out the light bulb it would run.  Curious. 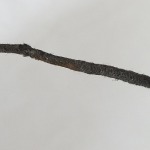 Closer inspection revealed a basic manufacturing fault with the light which caused an intermittent short circuit.  The lead had not been soldered tight up against the ‘button’ which left part of the wire exposed (arrowed right).
The exposed part was positive (+) 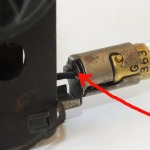 The site of the short circuit

When the bulb was inserted the ‘button’ was

pressed tightly by the spring against the frame (arrowed left).
The frame being negative (-) this caused a short circuit and the locomotive stopped.  The bulb holder relied on the spring tension to hold it onto the frame which is attached to the engine.  As this is not a tight fit shaking the loco would move the holder sufficiently for the short to clear until it ran over a set of points, say, when the clatter would move it again
The locomotive would have run on a very hit or miss basis. The fault has been cured by re-soldering the wire closer to the button so that the insulation was tight against the button base. Loco now runs a treat.
Unusually for Lionel in the UK it had not been taken apart and butchered by some inept repairer!

The donor of the loco had said that it was a present for her brother from an Aunt in America one Christmas in the 1950’s, but he did not play with it much.  Now we know why! 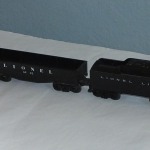 Looking good for its age!