This magnificent model was scratch built by Sir George Thomson in the 1930’s.  Currently owned by his grandson, it arrived in the workshop in September 2021 for a complete rebuild. 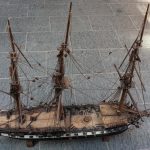 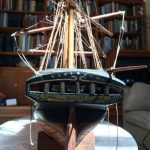 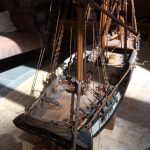 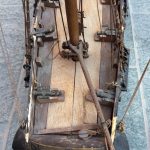 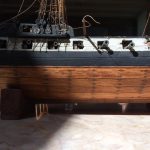 Time had taken it’s toll!  The rigging was so perished that it crumbled if I tried to move it to establish how it should have been set up.  The hull, masts & spars were fine, but the plywood decking had delaminated & warped.

The hull required stabilising.  The builder had used sealing wax & pitch to glue it together.  This had become very brittle & no longer had much strength.  As an aside, the fumes would have been interesting as the sealing wax would have been put on hot.  From my time working in a bank I could recall the smoky atmosphere & the smell! 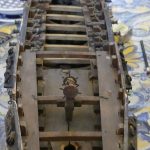 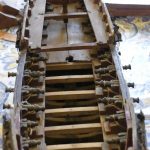 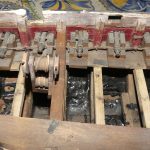 With the masts & decking removed, the internal structure could be seen.  The cannon have an interesting back story which is quoted in Sir George’s unpublished autobiography:

‘[an earlier model] had the honour to receive its guns from J. H. Poynting, of the electromagnetic vector, one of my father’s best friends.  I remember his coming to stay one day and producing between 60 and 70 unmounted brass cannon of two or three sizes, a present the magnificence of which still amazes me.  Some have disappeared, alas, but the considerable remnant arms the frigate I made in the 1930s, which still fires salutes on occasion.’  Let’s skip over the firing of a salute!

The ships wheel had been connected to the rudder.  The present owner was keen to have this repaired as he managed to break the cord when playing with it as a young boy! 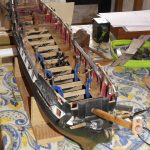 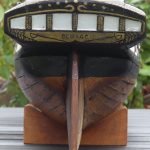 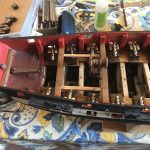 The cross beams required reglueing; the stern windows required reglazing & the ships wheel was reconnected to the rudder once again. 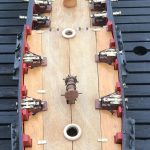 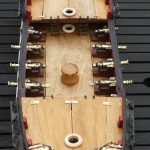 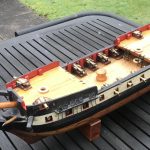 With the decks replaced, the cannon all cleaned up & roped back to the hull it was time to take her into daylight for some photographs.  The cuffs for around the base of the masts were turned from old cricket stumps. 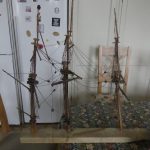 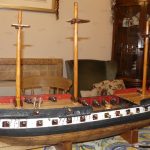 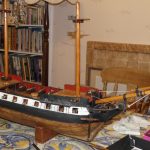 When I dis-masted the model I decided to keep what was left of the rigging intact thinking it would still give me a bit of a template.  To this end I set the masts in a block of wood.  This did not work out as envisaged.  The rigging was too far gone.  Therefore I stripped the lot, cleaned up the masts & spars & commenced resetting them in the hull.  Despite the models age, the pine still had a very strong smell of sap when they were rubbed down.

Now the ‘George’ was begining to look less like a hulk on the Medway awaiting breaking up and more like the ‘Victory’ during her recent major refit. 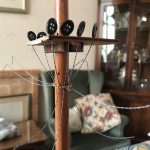 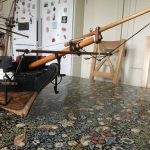 First job was to set up the masts, standing rigging & ratlines.  Some facts & figures: The standing rigging used 80 metres of rigging cord. The ratlines total 226, each spaced 3/8″ apart & a total of 1,124 figure of eight (or Saltire) knots hold them in place.  Phew, I was glad when that was over!

The remaining work was to set up the running rigging.  I decided to base this on the preserved HMS Trincomalee now preserved in Hartlepool.

In total the model used 123 metres of cord. 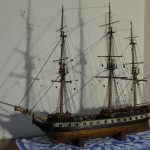 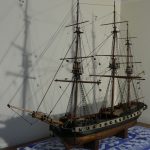 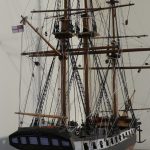 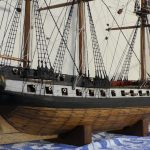 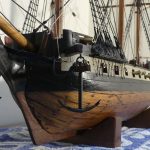 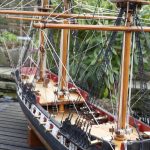 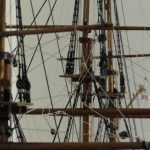 And there we have her in all her glory.  The ‘George’ is back in the Royal Navy!