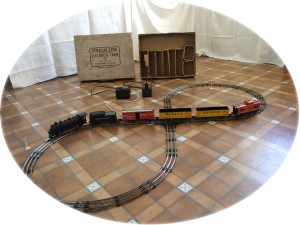 Restored set up and running. Doesn’t it look bonny?

Recently at Auction I purchased what looked like a mint boxed ‘Stream Line, steam type, Electrical Train’ Louis Marx set.  The cars, locomotive and track showed little wear and tear; in fact the track and truck wheels were still as bright as the day they left the factory.

This should have been a broad hint at what I was to subsequently find…..

Setting the track up to run the set I noticed that the near mint step down transformer showed signs of having been tampered with.  This did not bode well!  Testing the steel casing with my continuity meter it showed that it would not become ‘live’ when plugged in and a voltage check on the output showed it was giving the correct 115 volts.  However, it did make quite a distinct ‘hum’.

Plugging this into the Louis Marx controller and with this wired to the track I gently turned up the power.  The locomotive hesitantly burst into life and proceeded to trundle round the track.  After two circuits it was beginning to run smoothly and then it went for the third time over the 90⁰ crossover, on its own accord went into reverse, back over the cross over, then into forwards and expired.  Nothing, the power was dead.

Checking the fuse on the step down transformer it was found to be blown.  Replacing it didn’t do a great deal and so I decided to dismantle it and have a look inside.  Well, well, here was the source of the noise!  Someone had been here before me and had obviously not known how to correctly reassemble it and as is the fate of most American equipment, resorted to brute force and ignorance, mostly the latter.  The core of the transformer was designed to be clamped in place by a set of ‘fins’ on each side casing.  As this was designed to be a tight fit to prevent the core working loose during use then by necessity it was not going to be an easy push fit.  Importantly one side of the casing had to be fitted first.

Clearly this sequence had not been done and so the core plates looked like a badly made sandwich with the filling was spilling out.  So the transformer was released from the body, the core was placed in the vice and squeezed tight and the casing was slipped over to hold it tight.  The other side was slightly more difficult to fit as you could not get a clamp on to flatten the core.  Mulling this over the solution was to slightly open out the two ‘wings’ that formed the clamp so that the core would ‘self start’ into the clamps.  By gently tapping the side panel onto the body with a soft mallet it could be closed up into place.  Hey-presto the step down transformer worked silently and without over-heating, the added bonus being the core would not shift and make the casing live. 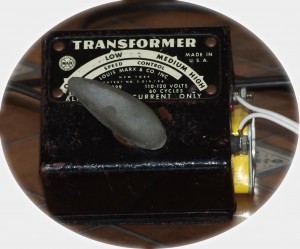 Back to the Marx set and another trial.  Plugging everything in and switching on the locomotive gave a kick and then nothing.  This time the problem lay with the Louis Marx controller.  It seemed to intermittently produce power and then the circuit breaker would cut out. 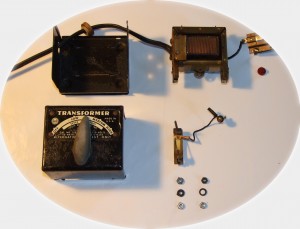 Nothing for it, but to dismantle it.  Opening it up it was obvious that yet again someone had been here before and boy, was it a mess. 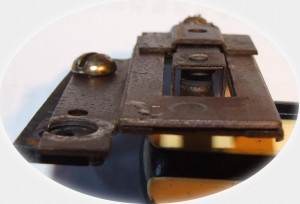 Thermal cut out contacts in centre of picture

The circuit breaker required resetting which was quite straight forward and now it did not pop until it was truly overloaded and when it did it would reset. 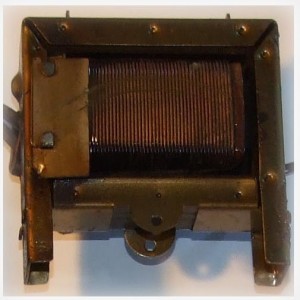 Damage manifests itself as an ‘arc’ on the winding.

Another problem!  The controller works like the Lionel ZW by wiping across the secondary windings.  Unlike the ZW this is a cheaper construction using a fixed soft brass button rather than a carbon roller.  The wiper arm had been badly bent so that instead of the soft brass button wiping the copper secondary windings it was the harder brass of the wiper arm.  This meant the soft copper was being worn away and quite quickly.  The off position is the rectangular insulating material on the left. 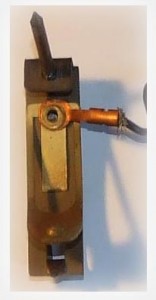 Wiper assembly. Note pivot pin at top and the critical ‘button’ that wipes the secondary towards the bottom.

So by carefully bending the wiper arm the soft brass button was now doing the job intended. When reassembling it is important to get the locating lug (out of picture as it is behind the ‘button’ assembly on the rectangular frame) correctly inserted into the slot under the controller operating arm.  To do this you need to position the wiper arm & the operating arm at precisely the same position as you lower the casing.  I chose the ’12 o’clock’ position.

If you need to force the casing down you do not have them lined up correctly.  The controller operating arm should rotate freely.

Suitably reassembled, power outputs checked with the meter, all okay, so now reconnect to the track and switch on.

Choice language is now to be heard as STILL the blessed thing won’t work!  In the best ‘Basil Fawlty’ style it is given one more chance and so I dismantle it again.  Much easier, practice makes perfect.  Carefully examining the whole set up with a magnifying glass I notice that one of the primary wires appears to be in a sorry state.  This does not bode well and could mean that the primary coil is ‘Kaput’.  Carefully cleaning the end of the wire I am able to check the continuity and resistance of the primary which is fortunately okay.  So the problem is a dry soldered joint on the primary and by re-soldering it the blessed thing now works.

Putting it all back together again to my delight the locomotive runs as it should.

So, the reason the set is in such good condition is that it never worked properly.  The dry soldered joint must have been the result of a manufacturing error which manifested itself intermittently as soon as the controller got anything like a load applied.  One can only imagine the disappointment of the child the set was bought for and the annoyance of the purchaser as they (ineptly) tried to get it to work.  What a pity the repairer didn’t take more time to work out how to put it back together again properly.