This restoration was started in the late 1990’s by my father.  He sent me on a mission to collect a box containing the mortal remains of American Flyer standard gauge locomotive and cars from a junk shop (and I am being kind here!) in the outskirts of Preston.  And I was to pay cash which did not thrill me when I parked outside the shop.  I fully expected to come back and find the remains of my car on bricks – just like all the others in the street.

Locomotive 4637 'Shasta' as restored by the late Geoff Bull

Anyway the owner exchanged the cash for a box of sad looking bits which in due course I handed over to father.  To cut a long story short the locomotive ‘Shasta’ was restored first and a beautiful job he made of her.  However, the three passenger cars were more of a challenge.

Although one of the cars was more or less complete the other two were basically a set of bogies and the bodies, fortunately complete with windows and doors, but missing everything else.  This was going to be a long job and remained untouched until early 2010.

I decided to tackle the job myself.  Examining the contents of the box it became apparent that the cars were fully restorable.  A search of the internet turned up nothing in the way of spare parts and so I decided to manufacture the missing bits, putting the roofs off until last!  They would be the biggest challenge as they are Clerestory with beautiful curves at either end in typical American Pullman fashion.  The originals would have been stamped out and pressed. 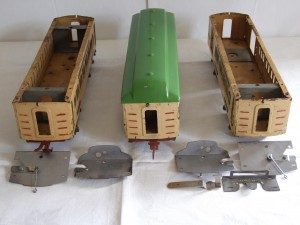 Drawings were made of the missing bits using those on the complete coach as a template and the various couplings, coupling brackets, roof supports and catch mechanism manufactured, basically a sawing and filing job.  Interestingly these are recycled from an old computer carcase which was just the right thickness. 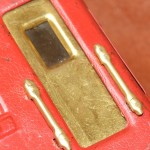 These are the original handrails seen on a similar set at Ilkley.  I decided some very passable reproductions could be made from ‘U’ shaped ⅛” brass which could be pressed flat to leave suitable protruding locating tabs. 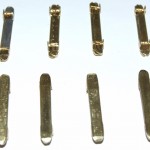 The picture on the right shows the very passable results. 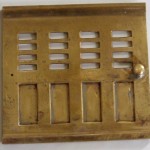 Now these parts were completed thoughts turned to the roofs.  Attending the Lionel Club’s annual Ilkley Show I gave ‘Shasta’ and the coaches a run and despite the missing roofs and unrestored paintwork they looked quite good.

Unfortunately no one had any spare parts, not even Albert!

However, Albert did tell me that no reproductions would be made in the near future which meant that I had to make the blessed things.  One member queried why I was bothering rather than cannibalising to make a complete set.  Two answers to that: I am a glutton for punishment and like a challenge.  The coaches are basically complete so why not restore them?

After all, look at the ‘Barry wrecks’ now running on preserved steam railways. 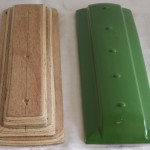 First stage of constructing the template for the roof. Original on right

So, to the roofs.  The choice as I saw it was to use a CNC machine to mill out the necessary blanks and then to use my press to form them from tinplate.  The other option was to make a pattern and then beat them out from brass sheet.  I chose the latter course of action.

This shows the start of the pattern alongside the remaining original roof.  The next stage was to build up the shape around the plywood using Ronseal wood filler.  I found this quite easy to work to the shape, but it is also hard enough to take the beating of the metal. 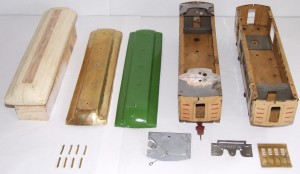 The completed replacements to date

This last photograph shows the completed roof pattern and the first roof made from brass.

One word of warning, you do need to wear a suitable dust mask when sanding the stuff otherwise you will stand a good chance of setting off an asthma attack.

Once the second roof is completed everything will be stripped down and painted.  Which will then mean there is another American Flyer Standard Gauge ‘Flying Colonel’ set once more tramping around the track.