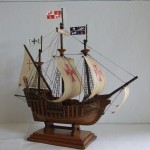 In early January 2012 I was contacted by Mr & Mrs Catchpole regarding the restoration of this model.  I was delighted to accept the commission as I could see that the standard of workmanship was of a high order, but age had taken its usual toll.

‘I didn’t become aware of this model until well after his death, so I’ve no idea what prompted his interest in it or how long it took him to piece together.

My grandfather went to sea at 15 (I still have his handwritten diary of his first voyage to Chile and back) and remained at sea until he became a husband and father, when he served as deputy harbourmaster at Dover. He was, I believe, one of the few people to have Captain’s papers covering both sail and steam. He was certainly a handyman.

I’m sure I don’t have an exhaustive list, but he started as an apprentice on the barque Shandon, of Glasgow. He also sailed on the steamers Pakeha, Plymouthean and Merionethshire. His name was Sidney Thomas Newing, and the inscription on his first voyage’s diary reads “I, S. Newing, do hereby dedicate this log to my brother Joseph, a printer’s devil in the city of Dover”!

I gather he was appointed Assistant Harbour Master at Dover at a time when it was hoped that Dover would become a port dealing with transatlantic liner traffic. The Red Star line from Hamburg to America called regularly until 1914 and the Hamburg America line occasionally, but the rise of Southampton as a transatlantic port eclipsed these activities at Dover.’

The structure of the model was basically sound, but all the rigging had disintegrated with age.

The following sequence of photographs show the condition of the model as received through to finished restoration. 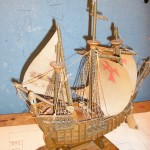 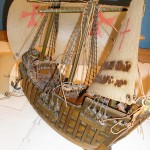 Looking as though she has survived a hurricane!

The fine lines of the model crying out for some TLC.

A plan was drawn up for future reference during reassembly. 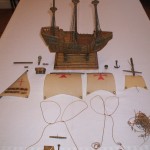 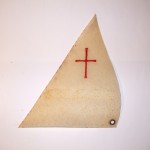 The writing on the mizzen sail was found to be tissue paper stuck on with cellulose glue.  This was carefully scraped off with a scalpel.  The cellulose had caused the plastic of the sail to de-nature slightly, but this is not too noticeable to a casual glance. 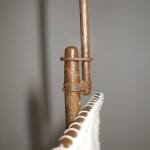 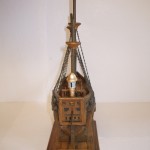 New flagpoles were required and these were attached by making a cap to the mast and tying on below the cap.

The stern lantern was repainted.

Sails were laced to the yard arms using ‘chainstich’. 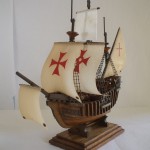 Sails were tried in place before rigging. 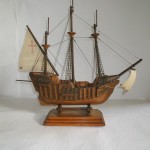 Sails and yards were trial fitted to check clearances before the standing rigging was fitted.

Standing rigging was done in black hemp to represent the pitch they used on the prototype.  Running rigging in natural hemp. 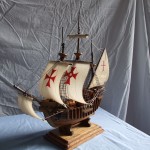 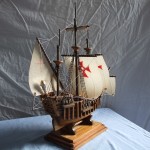 Personally I think the builder has captured very nicely the ‘look and feel’ of Columbus’ original Nao.

More photographs of the completed model.

How I produced a hand painted flag set in keeping with the original builders efforts.