In my efforts to establish the identity of the prototype Galleon it was modelled on and the identity of the builder I contacted the Deutschen Shiffahrtsmuseum, Bremerhaven.  I received a very interesting reply from Karl Heinz Haupt a former model builder at the Museum which is summarised as follows:

“The model under consideration is a historic model which has been freely reconstructed owing to a lack of documentation.  First one would try to ascribe a nationality to the model.  In this case heraldic images would be taken into account.  These crests (on the model) are the colours of the German Hanseatic Towns.  The Hanseatic town of Lübeck possessed a special red and white flag.  And thus follows the connection to a German manufacturer.”

In my original research I surmised that as the builder was German, but as the model was in Edinburgh, Scotland that perhaps the builder had been interred in the UK during WW2.  There were several POW camps close to Edinburgh and the most likely detainees were either from the Luftwaffe or the Kreigsmarine.  If from the latter that would explain their knowledge and skill of the rigging and general layout of the model.

Karl goes on to say: “In this case there are several possibilities.  It is possible that one or several interned German seamen completed this model, but it is also possible that a German student might have finished this model.  But these are are all assumptions which cannot be proved.”

As to the possible origins of the model: “It is in the style of a Galleon and can only be compared with the Adler Von Lübeck, a ship which was built in 1566.  Curiously the date of 1574 was given to me in the accompanying description (this was based on the note found within the hull) which actually occurs in the literature (about the Adler von Lübeck) whether this is a coincidence must remain open.”

“In general the model is fascinating because of its proportions, by which is meant the relationship between the overall length to the height from the keel to the topmast.  The hull stands up well and implies an expert builder.  The distances between the masts give an equally credible impression.”

Finally Karl concludes with a suggestion for the basis of the model: “It is a unique specimen which can be compared with the Adler von Lübeck (although) the dimensions are (general) and don’t give an exact comparison.  As a result the model should be seen as a decorative model which arose in the style of the Adler von Lübeck.”

So, my conclusions are that:

These three pictures show models of the Hanseatic league flagship (1567-88) Adler von Lübeck which is displayed in the Lubeck Town Hall. This gives a comparison with the model I have restored. 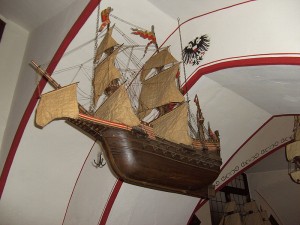 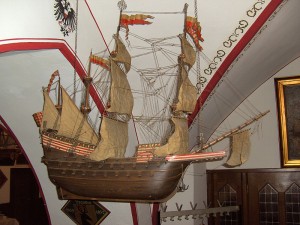 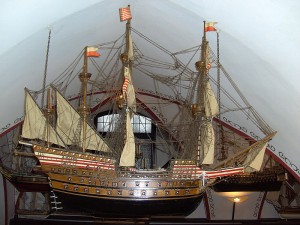