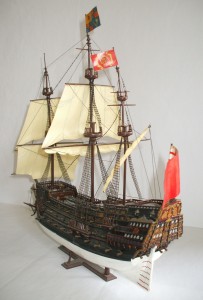 Jerry has been involved with the world of model making from an early age.  It all started when he used to visit the local toy shop every Saturday to spend his pocket money of 2/- (which just goes to show how long ago this was!) on an Airfix kit in a bag. Hours of fun would be had assembling, painting and then destroying.

Once this destructive phase was passed he graduated to Airfix’s larger Galleon models when for his 10th birthday he received the kit of the ‘Sovereign of the Seas’.  This he fully rigged and painted unassisted.  The model was subsequently entered into a model competition at school where he won second prize.

His involvement in modelling progressed to metalworking and for his ‘O’ level metalwork exam he constructed the tender body, cab and smokebox door of a 2 ½″ gauge ‘Flying Scotsman’ as described by F.J. Camm in ‘Practical Mechanics’. 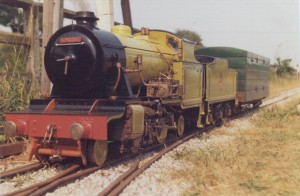 In the early 1970′s (his teenage years) involvement with the Yorkshire Dales Railway led to him becoming the custodian of the 9 ½″ gauge locomotive ‘King Tut’ which in those early years of the YDR was often the only live steam running for passenger rides.  During this time he refurbished the locomotive and several items of the historic rolling stock.

A busy time at Lionelville Depot. Photograph by Brian Monahan

Jerry and his father built and exhibited the largest Lionel Exhibition layout in the UK.  During the late 1970′s and early 1980′s the layout was a familiar site at many exhibitions in the North of England.  During this period he restored many, many items of Lionel locomotives, rolling stock and accessories that had either been ‘butchered’ by those less knowledgeable or just plain run into the ground.

A move to Scotland in the 1990′s saw him getting involved once again in live steam as a member initially of the Perth Society of Model and Experimental Engineers which latterly morphed into the Scottish Model Engineering Trust.  Here he runs a number of live steam models.

A venture into radio controlled boats saw him restore two elderly, freelance model ships converting unreliable steam plant into state of the art electric propulsion.  He has built a New Maquettes kit of the French Navy’s ‘Surcouf’ (D621) and fitted this with independent control of the twin screws, swivelling gun turret and lights.

For a friend (who was associated with the ship through the RNVR) he took a commission to scratch build a radio controlled model of ‘HMS Campbeltown’, (F86) a type 22, batch 3 frigate.

This brings us to the present day and the current projects Jerry is working on now that he has more free time.