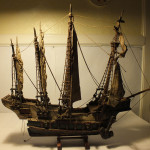 Fresh out the attic.
Looking rather sad.
Needs some TLC. 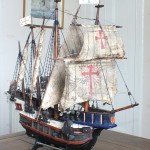 Flags flying.
Sails set.
The ‘Pinta’ is back!

When new it would have been a pleasing ornament, but like all of us as we age decrepitude set in.  The paintwork started to flake and the rigging rotted.  At some point the model was consigned to the attic and there she rested quietly gathering disintegrating.

Fortunately when the house was cleared the model was donated to someone who cared about these galleons and he asked Jeremy to apply his skills and restore her beauty. 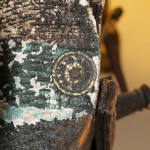 The button declares ‘Made in Germany’

“The model was made in Germany sometime between the two World Wars.

Construction is wood using a traditional ‘sandwich’ method giving it a solid hull.  In some places the knots in the wood are clearly visible.  Rigging was what I would describe as coarse string although the knot work was very good.” 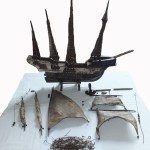 Stripped to the basic components

Dismantling carefully, it could then be thoroughly cleaned and examined.

Basic structure was sound.  The worst part was the white paint which had ‘chalked’ and all but flaked off. 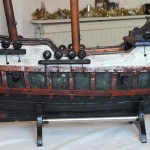 This was removed and repainted using Winsor & Newton Galeria range Titanium White suitably ‘aged’ with a hint of Raw Umber.  Weathering was achieved by rubbing a finger dipped in either Raw Umber or Black across it and then trying to wipe it off with a cloth.  The whole was varnished with a clear satin to give extra protection and to highlight the colour of the wood. 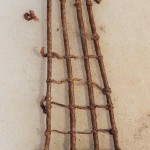 In the photograph can be seen a sheer pole at the foot of the ratlines.  This is incorrect for the period of the galleon and these were omitted.

Missing from the model was a set of flags and a stern lantern.  Presumably the latter had fallen off at some stage. 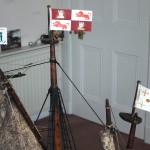 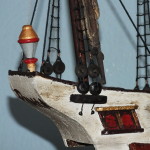 For details on how I make a cloth flag set read ‘Producing A Flag Set’.

The simple Stern Lantern was turned out of hardwood and painted with the Winsor & Newton Galeria Gold and Silver and then satin varnished.

The restored model looks the part.  The original modeller caught the look and feel of a galleon well, although it is not a strictly accurate depiction of Columbus’ Pinta.  It will be an attractive item to display once again. 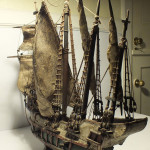 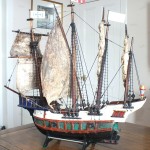 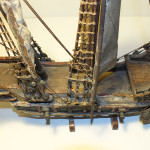 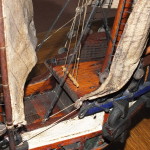