This model was received in a very sorry state……. 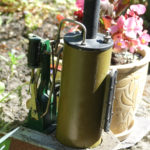 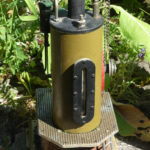 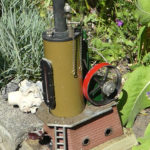 Looking into the site glass was almost impossible due to muck on the inside of the boiler.  The engine turned over quite freely and despite the additions of chains to the whistle and a strange lever to the regulator I decided to put in the correct amount of water and to light the fire – having first checked the operation of the safety valve I would hasten to add!

To my surprise it worked!  It ticked over very nicely and ran for quite a while until the fuel pellet was exhausted.

Looking under the drab olive green was the chromed boiler. I decided to restore the model to her former glory.  Careful removal of the paint revealed the chrome work to be in reasonable condition. I had been worried that the chrome would have been rubbed down to give the paint a key which would have basically made the restoration pointless.

Polishing the chrome bought it up to a good shine.  A respray of the rusty base in a blue approximating the original shade and repainting of the flywheel in a nice shade of red completed the cosmetic work.

Straightening of various bent parts and the addition of genuine Wilesco handrail stanchions and nice wooden handles for the regulator and whistle valves completed the platework.  There we have it, a nicely restored model. 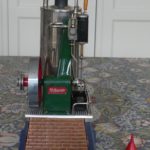 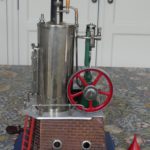 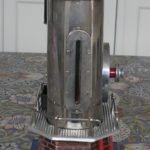 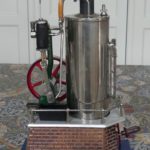 Apart from some rust on the ‘portholes’ the model looks splendid once again.