Miniaturerailwayworld.co.uk forums contained a few comments about ‘King Tut’ and the miniature Railway in Ilkley which were incorrect.  As my father and I were the custodians of the locomotive whilst it was on loan to the then Yorkshire Dales Railway (now the Embsay and Bolton Abbey Railway) and we had some minor involvement with the railway in Ilkley I thought it appropriate to write up the true story.  Part of this narrative appeared in Heritage Railway in 2004.

‘King Tut’ himself was a freelance 2-4-2 with no particular pedigree and uncertain age.  He was owned by a Mr T. McGurk of Harrogate and he kindly loaned it to the YDRMT in the mid 1970’s.  If memory serves me correctly the reason he had purchased the locomotive was to do with his wife’s connection with the builder.

This photograph illustrates ‘King Tut’ as first received at Embsay.

This photograph illustrates ‘King Tut’ on one of his first service trains at Embsay. 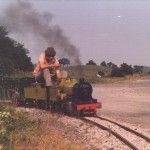 Reboilering was an opportunity to refurbish the locomotive

One curious feature was the boiler which was of steel construction with brass tubes.  Our boiler inspector was very keen to have a look at these and so we took one out.  To his surprise and our delight they were as good as new.  Shame the rest of the steel was not as good as the boiler was eventually condemned in the firebox area and a new one was commissioned from a builder in Barnoldswick.  Being all steel and with slightly fewer tubes than the original, ‘King Tut’ never steamed as well and one had to keep up a good fire at all times.

The collection of rolling stock that accompanied ‘King Tut’ was what could best be described as miscellaneous, but it did have three interesting vehicles, the first two of which were very nicely constructed wooden bodied bogie vehicles.  These seated two people who faced each other with their feet in a well between the bogies.  They were lettered ‘Canadian National’ and had come from the Canadian Pavilion of the 1924 British Empire Exhibition held at Wembley.  Included with this stock was a photograph from 1925 of King George V and Queen Mary sitting in just such a car.

http://www.gettyimages.co.uk/detail/3311344/Hulton-Archive illustrates King George Vth riding in one of the cars. 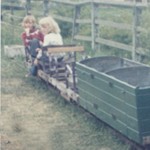 Where are the two Royal cars…..? We never knew for sure.

The green car seen here accompanying the open trucks was nothing special.

The final vehicle in the collection was a scale model of a Pullman car in Waggon Lits livery complete with interior furnishing and Maunsell wheels.  This had been built by a gentleman by the name of A. E. Salt whom we were told specialised in 9½” gauge.  Sadly it rarely saw the light of day and I never took a photograph of it.

In the early days of the Yorkshire Dales Railway it is worth remembering that standard gauge steam was prohibited and for a long while ‘King Tut’ was one of the main income generators from visitors to the site at Embsay. 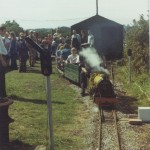 Another full load pulls away from the station

My Father’s ingenuity produced  interlocked colour light signals with an electrically operated point which added interest for the passengers.  I had a vested interest in this point system too, stemming from it utilising an old gramophone motor operating at 240 volts AC.  No low voltage stuff for my Father and if it had shorted to the track I suspect ‘King Tut’ would have surpassed the performance of ‘Mallard’ by quite a margin!  Father’s design for a shed with turntable eased the operational aspects and gave us somewhere to shelter from the bitter wind and rain that always seemed to slash down.

The late John Keavey’s knack of thinking up marketing ideas such as the ‘Sausage Sizzle’, school specials, the White Rose Vintage Vehicle Rally and Santa Specials to name but a few kept us very busy. 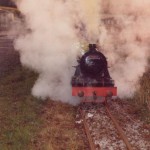 We safely carried several thousand  passengers over the years and contributed not only to thesurvival of the YDR, but encouraged at least one youngster in his love of trains to such an extent that he and his mother are valuable members of the present day Embsay and Bolton Abbey Railway (as the YDR is now known).

Alas the owner of this collection who had generously given it on long term loan passed away and the executors put it up for sale.  ‘King Tut’ departed South in the early 1980’s to a private railway just outside Newbury owned by Mr Hall-Craggs.  I lost contact with the locomotive after this move until the other evening when I was browsing the web and came across the Miniaturerailwayworld.co.uk website which states that the locomotive moved again in the 1990’s this time to the Wellington Country Park Railway, Riseley, Berkshire.  Here it was owned by Ray Hammond, but he moved on from this site and now the whereabouts of ‘King Tut’ is unknown.

In the same blog (miniaturerailwayworld.co.uk forums) reference was made to the Miniature Railway in East Holmes Fields in Ilkley and that ‘King Tut’ ran here.  Well I can categorically state that he never did for the simple reason that the track gauge in Ilkley was 10¼”!!

The history of the Ilkley railway is as follows; Local enthusiast Terry Stanhope originally ran it as the Olicana Railway using an 0-4-0 petrol hydraulic steam outline locomotive.  In the late 1970’s / early 80’s Terry acquired a lease on the old North Eastern Railway gas works in the triangle of the old Arthington Station.  He wanted to relinquish responsibility for the Olicana Railway and offered a lease to the YDRMT which was accepted.  The railway was run primarily by Dr. Fred Youell and generated a reasonable income.  Eventually as operations developed at Embsay after the granting of the Light Railway Order it was decided to give up the lease and at this point Terry Stanhope closed the railway.

As an end piece the Ilkley 0-4-0 was sold to Kerr’s Miniature Railway in Arbroath where it could be seen running as ‘Ivor’ until closure in 2020.

So there you have the story of ‘King Tut’ and the Olicana Railway (Ilkley).  If anybody knows where the locomotive is now and if it has been regauged to 7¼” as has been suggested I would love to hear from you.