The design appeared in 1939 in the Model Engineer.

As acquired the model was in a very sorry state, although the basic structure was sound.  It had never been fully completed, for example the cab and reversing quadrant were missing and no cladding over the boiler.  The tender had a very curious arrangement for the water and meths tanks.  It was painted (if that’s the right description!) in a curious shade of LNER green.  The saving grace was the basic engineering work was sound.

The first step was to acquire the ‘words and music’ which TEE Publishing offer as a photostat facsimile of the constructional articles:

There was little option but to completely strip the locomotive down and to rebuild it from the wheels up. Some of the work involved is shown in this selection of pictures.

Stripped, masked and primed ready for the top coats of black on the outside and red inside.  At the rear can be seen the reversing quadrant that was made.  The slot allows for notching up.

The valve gear was set up such that it works in reverse to standard practice, ie pull back for forwards and push forward for reverse.  I did consider changing this, but decided on balance to leave it.  My reson being that as the locomotive spent most of its time running forwards it would be much easier to reach the reverser in the confined space of the cab. 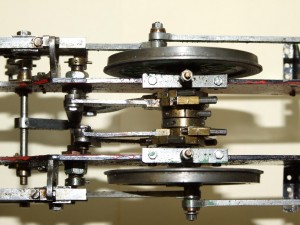 Stephenson’s link motion, extremely well made.  As you can see a very tight fit between the frames.  No space to fit an axle pump as the rear set of driving wheels are under the firebox.  Getting water into the boiler relied solely on a hand pump which given the silver soldered boiler and meths firing was unlikely to cause any problem in the event of running out of water. 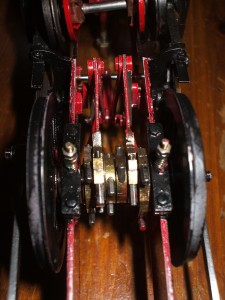 All smartly painted and run on air to ensure valve settings were correct and that no tight spots due to paint existed.  During this stage it was noticed that when fully in forward the motion gave a ‘kick’.  This was traced to the left hand die block not having enough travel in the swing link.  A slight adjustment to the length of the slot so it matched the right side soon cured this and she ran as smooth as a sewing machine on air.

Now came the fun part of dealing with the boiler.  The first job was an hydraulic test to 140 psi to test integrity.  No problems with this were anticipated as the boiler looked well constructed with good flow and penetration 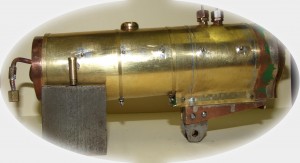 of the silver solder.  Sure enough, tight as a drum, passed with flying colours.  Work on the boiler included matching the safety valves both operationally and visually, making a dummy clack for the left hand side to balance the appearance and fitting the cladding, boiler bands and handrails.

It was decided to use the screwed plug in the dome as the boiler filler point and so this was machined to look much more like the finished article would do when covered with the dome cover. 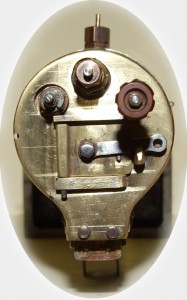 Quite a lot of work was undertaken to make this look neat and tidy.  The original drop down firehole door was replace by a door that swung to the left.  Cladding was fitted and the regulator handle slimmed down so it was less clumsy.

The loco had been a shy steamer which my father never managed to cure.  Carefully examining the performance of the burner in the firebox it became apparent that firstly there was not enough ‘oomph’ from the meths burner.  So this was modified to have 6 wicks in ⅛” tubes, alternatively offset slightly from the centre line to ensure a spread of flame within the curve of the firebox.  This improved matters, but didn’t solve it.  Again, studying the flame it became apparent that under strong draught the flame tended to get sucked straight through the tubes without heating the firebox.  So a carefully placed steel arch forced the flames to swirl to the rear of the firebox first and then to exit to the tubes over the top of the arch.  Another improvement, but we could still do better!  The final tweak was to the blast pipe as when running under load the flame was effectively sucked out.  To cure this I extended the blast pipe almost to the rim of the chimney and relied on the blower, which could be finely adjusted, to provide a constant draw to the flame.  This worked a treat.  To my mind the advantage of this is that the locomotive still gives a nice bark when running. 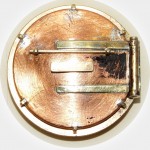 Detail added to the locomotive included Smokebox door dogs, BR number plate bracket, door handrail and hinge straps.  On the ‘Schools’ the number plate is bang in the centre of the door and so I also utilised this as the door clamp, meaning the dogs are dummies.

Other detail included ‘tumble home’ cab, smoke deflectors, kink in the footplating valence just above the cylinders, exhaust ejector pipe, injector pipework and cab beading.  Looking at photographs I felt that these were the major visual features of the class.

The tender plate work was tidied up with the addition of beading and the methylated spirit tank and water tank were incorporated correctly in the tender body.  The electronics for the water level indicator were tidied up and concealed on the tender footplate.  The addition of a dummy coal load completes the disguise.

It is a shame that when LBSC provided the alternative for the slip eccentric that he didn’t design Walschaerts rather than Stephenson’s.  Not only would this have been prototypical surely it would have been easier as you wouldn’t have needed 4 eccentrics.  We shall never know!
Here is a short video of the ‘BAT’ in action on the workshop bench, March 2010: