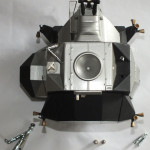 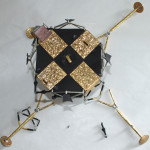 An unusual request for help arrived in my inbox from  gentleman in Skipton.

“I have purchased this on E-Bay and wondered if you could restore it?  If you can it will take it’s place on my diorama of the Apollo moon landings.”

Well, I like a challenge and it would make a refreshing change to galleons.  Research on the internet revealed that the Franklin Mint model was to 1:48 scale, acknowledged as a faithful reproduction and a limited edition.  It was well worth restoring.

The Ascent stage work undertaken was as follows: 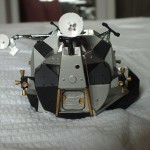 • Construction of a rendezvous radar antenna
• Construction of the steerable ‘S’ band antenna, fixing this to the stand and in turn gluing the whole assembly to the ascent stage.
The two antenna have been cast in resin. 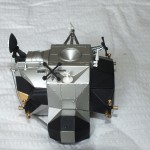 • Construction of two VHF antenna from brass with the end beads cast from resin. These are then Araldited to their respective stands.
• Construction in brass of the missing top of the docking target.
• Re sticking the broken reactor thrusters and constructing from brass one replacement.
• Sticking the broken handrail knob on the egress handrail attached to the ascent stage.
All are then painted appropriately.

The Descent stage proved more challenging. The legs and associated supporting brackets are diecast which meant that I was unable to solder them. Instead I used Araldite to give a good strong bond. The work undertaken was as follows: 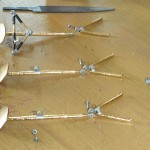 Removing the rivets to dismantle the legs

To restore the legs such that they moved correctly the first step was to remove the rivets by gingerly filing off one end.  This in two instances also released the broken end to a support bracket. 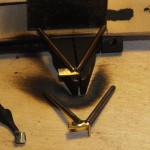 Using the broken half of a top support as a pattern I manufactured two complete replacements out of brass. 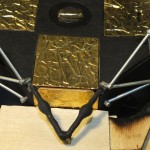 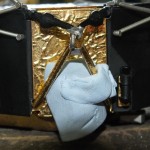 Next, the lower support brackets were fixed to the descent module. It was important that these two brackets lined up properly otherwise the rivet which has to pass through to support the leg would not fit. Blu-Tack came in very useful here as a temporary support. 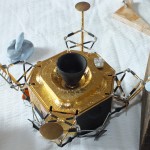 It was at this stage of reassembly that handling the Descent stage became a bit like trying to deal with a struggling insect. These legs had a life of their own and kept flopping about all over the place, never mind getting in the way as I tried to work on another one! 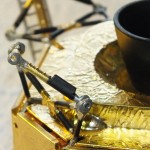 This picture illustrates the hinged lower leg support that allows the legs to fold in or out.

The bracket which fixes to the lower part of the leg was broken and had to be Araldited in place. The broken piece is shown after removal from the leg in the photo ‘Removing the rivets…….’ (above) and after gluing.
So far, so good….. 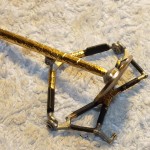 One of these hinged lower leg support assemblies had one of the hinge brackets that fits into the base of the Descent Module broken off.  Originally these supports will have been fitted into place in the body of the Descent Module and then the base plate fixed to hold them in place. I could not see how the base plate could be removed.  Rather than damage the gold foil trying to find out I manufactured from brass a replacement hinge that can be fitted into the base slot first and then pinned and glued into the bracket. 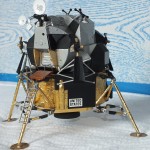 The restored model standing on it’s own four feet again

For final assembly the original rivets have been used where possible, but instead of forming the rivet head and risking breaking it all again the addition of 14ba brass countersunk screws held them in place.  In two instances the rivet was too badly bent when the model was originally damaged to be reused. These I replaced with brass screws which when painted are quite discrete.

So there we have it, one Franklin Mint, Limited Edition Apollo 11 LEM restored to former glory.  The addition of a discrete clear stand inserted into the blast nozzle of the descent stage set to a height such that the weight of the model now rests on the stand and NOT the delicate legs. 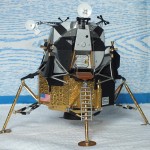 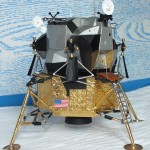 The moral of the story?  The die cast model weighs 3.5Kg, the legs were designed for Lunar Gravity and are therefore very, very delicate.  They just about support the weight, but will not survive if the model is dropped!